Home > Blog > When Should You Move to Australia? (5 Tips)

When Should You Move to Australia? (5 Tips)

Well, let’s be honest: any time is a good time to move to Australia. However, there are several important aspects of moving to Australia that you must consider before getting on that first flight out. Moving to Australia should be an exciting journey and a relatively smooth process – if done correctly.

Generally, you should know first what to expect upon your arrival in Australia. There are significant reasons why thousands of foreign nationals make Australia their new home every year: it is one of the top-ranked countries in the world when it comes to health, education, quality of life, and career opportunities. People emigrating to Australia are further drawn to it by the warmer climate, unique outdoor activities, stunning landscapes, and welcoming communities.

In fact, people who completed their Australia immigration process and settled in their new life enjoy a dramatically improved work-life balance; relatively higher wages and more time off, enable them to invest more energy into their hobbies, outdoor activities, and their families. This is particularly important for expats emigrating to Australia with children.

Now that we covered the basics, here are several important aspects and tips to consider when emigrating to Australia:

Emigrating to Australia during bad weather isn’t the worst thing in the world, and it is definitely not a deal-breaker. However, wouldn’t it be nice to move to Australia when it’s sunny and warm, rather than having to drag your luggage through the snow? Also, summertime means catching some waves and enjoying shrimp on the barbie!

Generally, emigrating to Australia from June to August is not very recommended as it is the coldest in Australia during these months. If that is the only time you can travel and if possible, consider going up north for more mild weather.

The southern coast of Australia is home to major cities such as Adelaide, Melbourne, and Sydney, and has the warmest weather between December and February; average temperatures range from the mid to high twenties (70 ° F to 80 ° F). With heavy rainfall and occasional monsoons in summer, the northern and north-western areas have tropical climates. The central area is very hot and dry.

If you are not prepared for your own move, who will be? It is a big deal to move to Australia, or any place, for that matter, and it takes a lot of preparation and effort to make it happen successfully.

Ideally, you can keep the gap between your Australian visa grant date and travel date from at least 8 months to 1 year. This will allow you to complete time-consuming preparations such as selling or renting your house, packing your belongings, and arranging your finances both in your country and in Australia to cover expenses.

This time can also be used to research in-depth the Australian lifestyle and job market (if you applied for an Australian visa that doesn’t require a job offer in advance), which will ultimately be beneficial for a smoother transition into the Australian community and your new life in Australia as a whole.

Schools in Australia usually open at the end of January or early February. If you have kids who are still going to school, consider moving to Australia at least 3 months before the beginning of the school year to help everyone settle.

You also need time to finish enrolment formalities. For example, one of the first obligations before enrolling your children in school is to update your children’s’ immunization details in Australia’s medical records.

The date is usually less than a year from the actual grant date.

In any case, this is a tough deadline that you must reach to keep your Australian visa valid for the next 5 years. You can always take a short visa confirmation trip and decide to move permanently later if you are uncertain about moving to Australia or have not had enough time to prepare.

Time for a fun fact! Most people who plan on obtaining an Australian visa and relocate plan their move for the months of January-March or July-September. According to public perception, those are the best time periods to find jobs in Australia (if you don’t already have a job offer). Apparently, there is a surge in job openings during those times.

Between January and March, the Christmas holidays are just over and most people are back to work by the end of January. Also, at the start of a new year, many businesses that operate according to the calendar year are more likely to fill open positions. As a result, during this period, more positions are being advertised. So, during this time, you will have a broader range of opportunities and greater chances to secure a job.

Similarly, the beginning of the new financial year in Australia takes place from July to September. As a result, new team budgets or projects are finalized, which in turn create more open roles for job seekers. From early September to late November, there seems to be a rise in job listings. The assumption is that businesses want to fill job vacancies before the start of the Christmas holidays.

Since the school summer holidays in Australia coincide with the end-of-year festive period, a lot of people just take it easy and head overseas. Hiring activity particularly goes down in that period. So, if you plan to look for a job after arriving, it is a good time to arrive from mid of January onwards.

Having said that, it is still entirely possible to get a job offer any time during the year, and there is an advantage to avoiding those common months, as you may be able to beat your competition to a certain degree from fellow migrants.

Lastly, think about the airfare! It could cost you more or less, depending on when you decide to travel and how early you book the ticket.

The Christmas holidays and the first few weeks of January and are notably the worst times for traveling, due to high demand, which means high prices and busy airports.

Instead, you can find a decent airfare deal during the off-peak season that can be significantly cheaper than other deals. If you take a look at the airfare trends, you can get an idea of the time that suits best for you to travel.

Obtaining permanent residency in Australia is truly the highlight of Australia immigration. Permanent residency means that you can settle comfortably anywhere in Australia without worrying about a deadline (as with temporary visas), travel and study anywhere, register for free healthcare, and subsidized education for your children. If eligible, you will also have the opportunity to apply for Australian citizenship.

Having Australian citizenship has many similar advantages – and a few extras:

If that’s not bewdy then we don’t know what is!

As you can see, once you obtained your Australian visa and started your relocation process, you have many options and variables to consider. Take everything into account to figure out what would be your best course of action. Most importantly – take it easy!

If you are just starting your application process for an Australian visa, or you are not sure what visa you would even qualify for, contact an immigration expert today!

At UIS Australia we provide a variety of immigration services to immigrants from around the world, as well as tailored solutions for complex immigration cases. We would be happy to help you on your exciting journey and give you the head-start you need to make it to Australia.

Contact an immigration expert today via the button below! 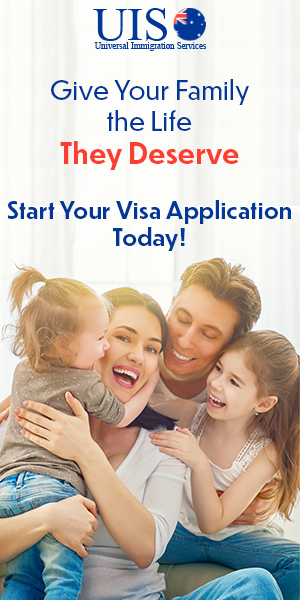